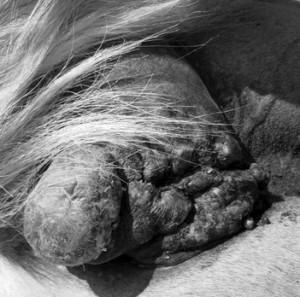 Melanomas are malignant tumors comprised of abnormal melanocytes, cells that produce the pigment melanin that tints the skin.  In horses, melanomas are slow growing and locally invasive.  They usually do not cause disease when confined to the skin, but occasionally a tumor may metastasize, spreading to other tissues within the animal’s body.  Gray horses possess more melanocytes in their skin than do other colors of horses, giving them a higher propensity to melanoma formation.  More than three quarters of gray horses over the age of fifteen will develop a tumor of this type.  Melanomas in the skin vary greatly in size and shape, sometimes mimicking other skin masses like warts, and they are usually darkly pigmented (dark brown or black) by melanin.  They may be found as solitary masses or in undifferentiated clusters.  Melanomas tend to be found around the anus, vulva, prepuce, and base of the tail, around the eyes, ears, and neck; usually non-painful, the masses may become inflamed and ulcerated, attracting flies and secondary bacterial infection, or may interfere with normal feeding or defecation.  While in the skin, the tumors may remain inconsequential or may require surgical removal; however, if they originate in, or metastasize to internal organs, melanomas carry a grave prognosis.

In people, melanoma tumors are associated with excessive sunlight exposure and fair skin lacking melanin.  Damaged melanocytes begin to divide at an uncontrolled rate, forming a mass.  It is unclear if sunlight exposure is the direct cause of melanomas in horses, however.  There may be genetic factors or other environmental stresses at play.  All that is known is that grays tend to be at a higher risk, despite the fact that melanin protects the skin from ultraviolet radiation.  Melanoma occurs less frequently in dark-skinned people; the rule holds untrue for dark-skinned horses.  Other colors of horses account for about one third of all skin melanomas.

If and when a mass is discovered, a veterinarian should be consulted.  It is important to confirm a diagnosis whether treatment will be immediately pursued or delayed.  A biopsy and microscopic evaluation by a pathologist, along with a history of the growth of the tumor and the gross appearance, are necessary to determine a course of action.  Small tumors may be observed for growth or removed at once in an effort to avoid complications.  Some veterinarians believe that attempting to excise a melanoma may actually cause it to become more aggressive in nature.  Most prefer to not take any chances with the tumor exploding in size or metastasizing.  The location of the mass will have an impact on the veterinarian’s decision.  Very small tumors can typically be removed after the placement of a local anesthetic; while larger, more invasive tumors will require a general or epidural anesthetic to be administered.  Laser surgery has proven beneficial in removing precariously located tumors.  Melanomas removed and shown by histopathology to have clean margins (healthy cells surrounding the mass) generally result in a cure.  Surgery on very advanced tumors may require the expertise of a specialist in equine surgery.

Non-surgical options for treatment of melanoma that have shown mixed results include oral cimetidine (Tagamet), an H2 blocker – antacid drug; topical therapy with cisplatin or frankincense oil; and melanoma vaccine.  These therapies may cause the tumor to shrink in size, delaying complications or facilitating removal, but will not ultimately stop the tumor from progressing over time.

The prognosis for a quickly detected, diagnosed, and removed melanoma is good.  Tumors that are invasive, wide-spread, or internalized are much more likely to result in dire outcomes. 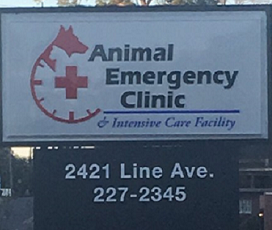 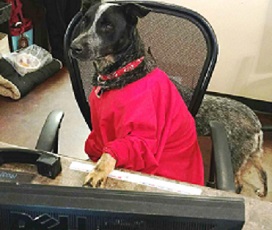